Wheat is an economically important cereal worldwide and is a staple food in many countries. Extensive researches have been performed on the nutritional value and antioxidant potentials of sprouts of legumes like soybean, however very limited studies have been carried out on the sprouts of Korean wheat cultivar. The objective of this study was to investigate the phytochemical and antioxidant potentials of Korean wheat sprouts. The sprouts were grown for 10 (WS-10), 20 (WS-20), and 30 (WS-30) days at room temperature. The pH, color, chlorophyll, free amino acid, 1,1-diphenly-2-picrylhydrazyl (DPPH), and total polyphenol content of the sprout samples were determined. The pH of sprouts was increased in the older sprouts. Color values were significantly influenced by the age of sprouts. The chlorophyll content was lowest but the total free amino acid content was highest in WS-30. On the other hand, the DPPH free radical scavenging potential and total polyphenol content were lower in WS-30. The results suggested that Korean wheat sprouts could be a potential source of nutrients and natural antioxidants.

Wheat (Triticum aestivum L.) is one of the major global food crops. In the human diet, wheat is mainly consumed as the products prepared from flours, the nutritional value of which gets decreased as compared to the whole grains (Yun et al., 2018). Most dietary fiber, resistant starch, vitamins, minerals, and phytochemicals, including polyphenols, which are present in the germ and bran, are normally wasted by milling (Dykes and Rooney, 2007; Liyana-Pathirana and Shahidi, 2007; Slavin, 2004; Vaher et al., 2010). For cereals like wheat, consumption of whole grain is considered better; however, since the whole grain needs heat treatment (roasting, boiling, and/or steaming) to convert it into palatable, a substantial proportion of health-related nutrients may be reduced with cooking (Rochfort and Panozzo, 2007).

Wheat sprouts may represent an appropriate alternative to supply a high amount of nutrients present in the wheat grains as possible in the human diet. Generally, sprouts are utilized as components of salads. In addition, it has been suggested that the declined nutritional value of the conventional wheat flours and derivatives could, to a great extent, be restored by blending the dried sprout powders (Świeca et al., 2017) without compromising people's feeding behaviors.

Sprouts can easily be produced without using any expensive technique. Seed sprouting, usually, increase nutritional value (Gulewicz et al., 2008) and decrease anti-nutritional factors, thus making the sprouts more beneficial for human health (Luo et al., 2013). It has been recognized as an appropriate technology for the sustainable production of nutritious vegetables year-round. It can, therefore, be applicable to help fight against malnutrition (Wei et al., 2013), especially in the poor and developing countries.

Wheat is a common cereal worldwide. In addition to its consumption as a staple food and use in different food items, wheat possesses a big potential to be used in producing nutritious sprouts. People are becoming more conscious regarding the health effects of the foods they consume. Also, the food demands of consumers have also been diversified these days. Although extensive studies have been carried out regarding the quality and nutritional value of sprouts of legumes like soybean, very limited studies have been conducted on the nutritional and functional potentials of sprouts of Korean wheat cultivar. Considering the nutritional value of wheat and people’s attraction towards new food items, this study was conducted to investigate the quality characteristics and antioxidant potential of wheat sprouts.

Wheat (Triticum aestivum L.) seeds of cultivar “Tapdong” was obtained from the Agricultural Research and Extension Services, Gyeongsangbuk-do, Korea. The mean 100-seed weight of the seed sample was 4.6 g.

Wheat seeds were cleaned to remove debris and external materials. Two hundred grams of intact seeds were washed with tap water for surface cleaning and then soaked in tap water for 5 h. After 5 h of soaking, water was drained out and the seeds were put into 5-L plastic buckets having a perforated base for sprout cultivation. The buckets containing the sprouting seeds were watered for 2 min every 24 h. The experiment was conducted at room temperature (23±2℃) for 30 d. Wheat sprouts were harvested at 10, 20, and 30 d and were named as WS-10, WS-20, and WS-30, respectively. The fresh sprouts after each harvest were stored at -70℃ for 24 h before freeze-drying. The freeze-dried sprouts were powdered using a grinder (HIL-G-501, Hanil Co., Seoul, Korea) and passed through a 100-mesh sieve. The powdered samples were stored at -20℃ until analyses.

One gram of sprout powder was mixed with 9 mL distilled water and left for 1 h at room temperature followed by filtration through a filter paper (Whatman No. 4). The pH value of wheat sprouts was measured using a pH meter (PHS-3BW, Bante Instrument Co., Ltd., Shanghai, China).

The total chlorophyll content of the sprout samples was calculated following the equation of (Arnon, 1949) as described by Adhikari et al. (2019). One hundred milligrams of the ground sprouts were extracted with 7 mL of dimethyl sulfoxide at room temperature for 24 h. The extraction mixture was filtered through a filter paper (Whatman No. 4) and a final volume of 10 mL of the extract was made with dimethyl sulfoxide. The absorbance of extracts was measured at 644 ㎚ and 662 ㎚ using a microplate spectrophotometer (Multiskan GO, Thermo Fischer Scientific, Vantaa, Finland).

where ‘OD’ is the optical density measured at the respective wavelengths.

For determination of free amino acids, the sample powder (1.5 g) was homogenized (12,000 rpm, 2 min) with ice-cold 6% (v/v) perchloric acid (10 mL) in an ice bath using an ACE homogenizer (Nissei AM-7, Nihonseikei Kaisha Ltd., Tokyo, Japan) and then incubated in ice for 30 min. The ice-cooled sample mixture was centrifuged at 4,600´g for 15 min and the supernatant was filtered through a filter paper (Whatman No. 41). The pH of the filtrate was adjusted to 7.0 using KOH solution (33%, w/v) before centrifuging at 4,600´g for 10 min to separate the precipitate of potassium perchlorate out of the reaction mixture. The pH of the supernatant was adjusted to 2.2 using 10 M hydrochloric acid and distilled water was added to make the final volume 50 mL. Two milliliters of the reaction mixture were mixed with 1 mL lithium citrate buffer (pH 2.2) and the mixture was used to determine the free amino acids using the amino acid analyzer.

The DPPH free radical scavenging potential was determined through the DPPH free radical scavenging activity (Blois, 1958; Dhungana et al., 2016). Sprout powder (1 g) was extracted with absolute methanol (10 mL) at room temperature for 6 h. The concentration of sample extract was 10% (w/v). The extract mixture was centrifuged at 1,660´g for 10 min and then the supernatant was filtered through a syringe filter (0.22 ㎛). Fresh DPPH solution (0.1%, w/v) was prepared in absolute methanol. An equal volume (100 µL) of sample extract and freshly prepared DPPH solution was mixed in microplate wells and left in dark for 30 min. The absorbance of reaction mixtures was measured at 517 ㎚ using a microplate spectrophotometer (Multiskan GO, Thermo Fischer Scientific, Vantaa, Finland). The DPPH radical scavenging activity was calculated based on the absorbance (A) values of reaction mixtures using the following equation:

The total polyphenol content in sprout powders was measured following the Folin-Ciocalteau method (Singleton et al., 1999) as described earlier (Dhungana et al., 2015). Sample extracts were prepared as in the DPPH assay. Fifty microliters of sample extracts were mixed with 1000 μL of 2% (w/v) aqueous Na2CO3 and kept for 3 min. After 3 min of incubation, 50 μL of freshly diluted 1 N Folin-Ciocalteau reagent in distilled water was added to the mixture and incubated in dark at room temperature for 30 min. The absorbance value of reaction mixtures was measured at 750 ㎚ using a microplate spectrophotometer (Multiskan GO). Gallic acid was used as a standard to make a calibration curve. Polyphenol was determined as gallic acid equivalents (㎍ GAE/g dry weight).

The chlorophyll content of wheat sprouts was decreased with cultivation time (Fig. 2). Two sprout samples WS-10 (34.91) and WS-20 (33.70) did not show a significant difference in their chlorophyll content, which was higher than that of WS-30 (28.42).

zSamples are defined in Fig. 1.yValues are means ± SD of triplicate measurements, the values followed by different letters in the same column are significantly different (p < 0.05).xNon-detectable. 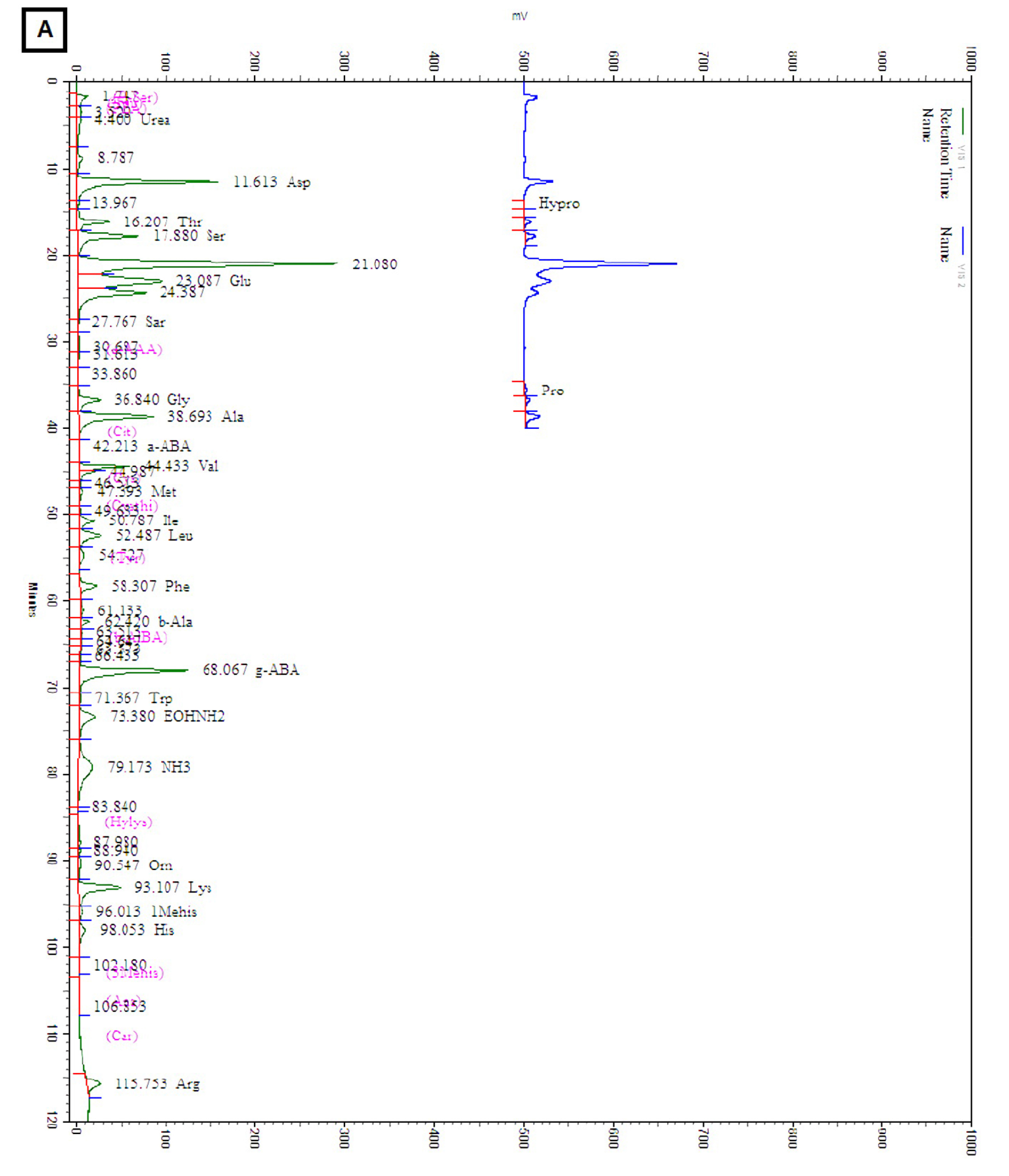 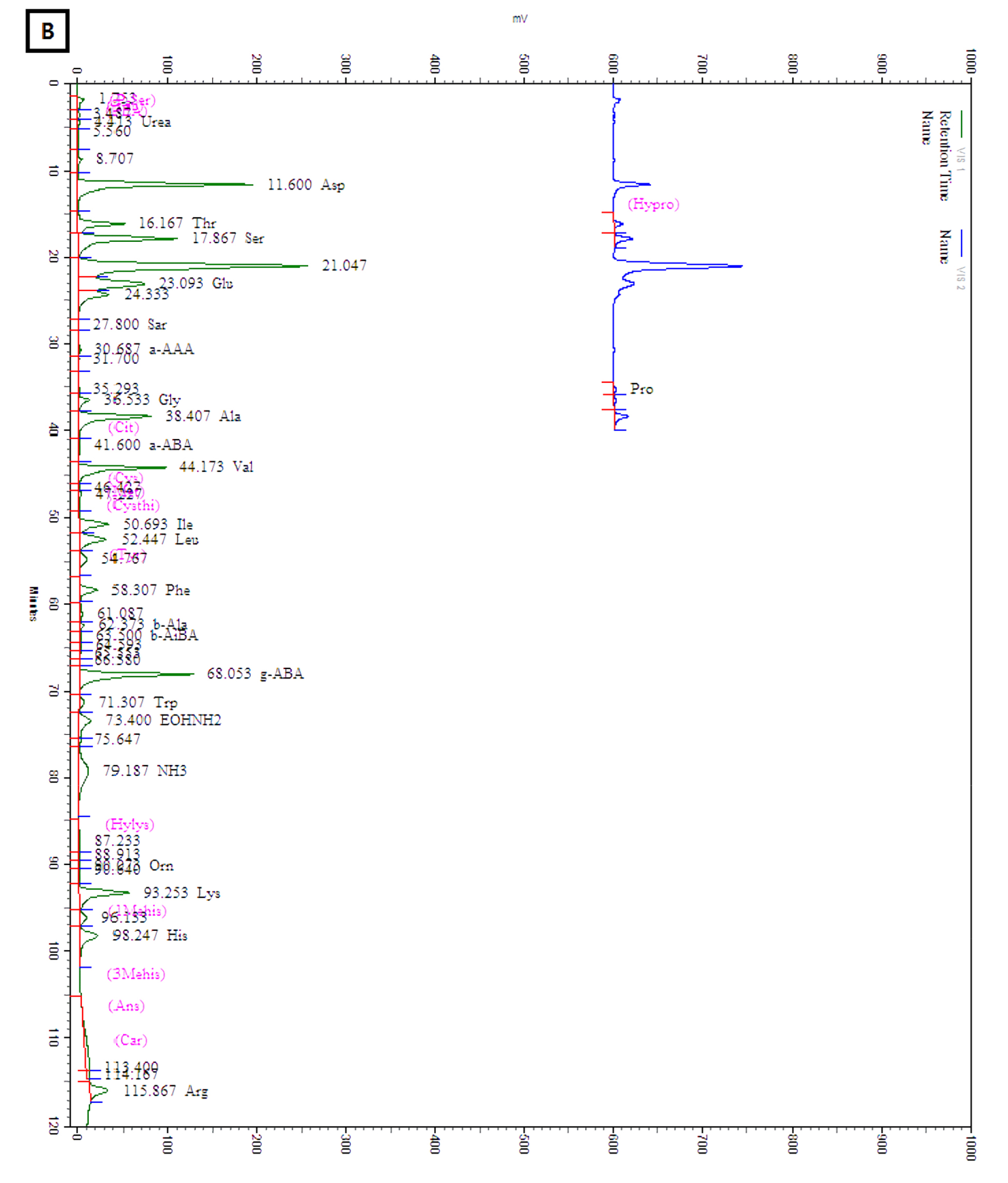 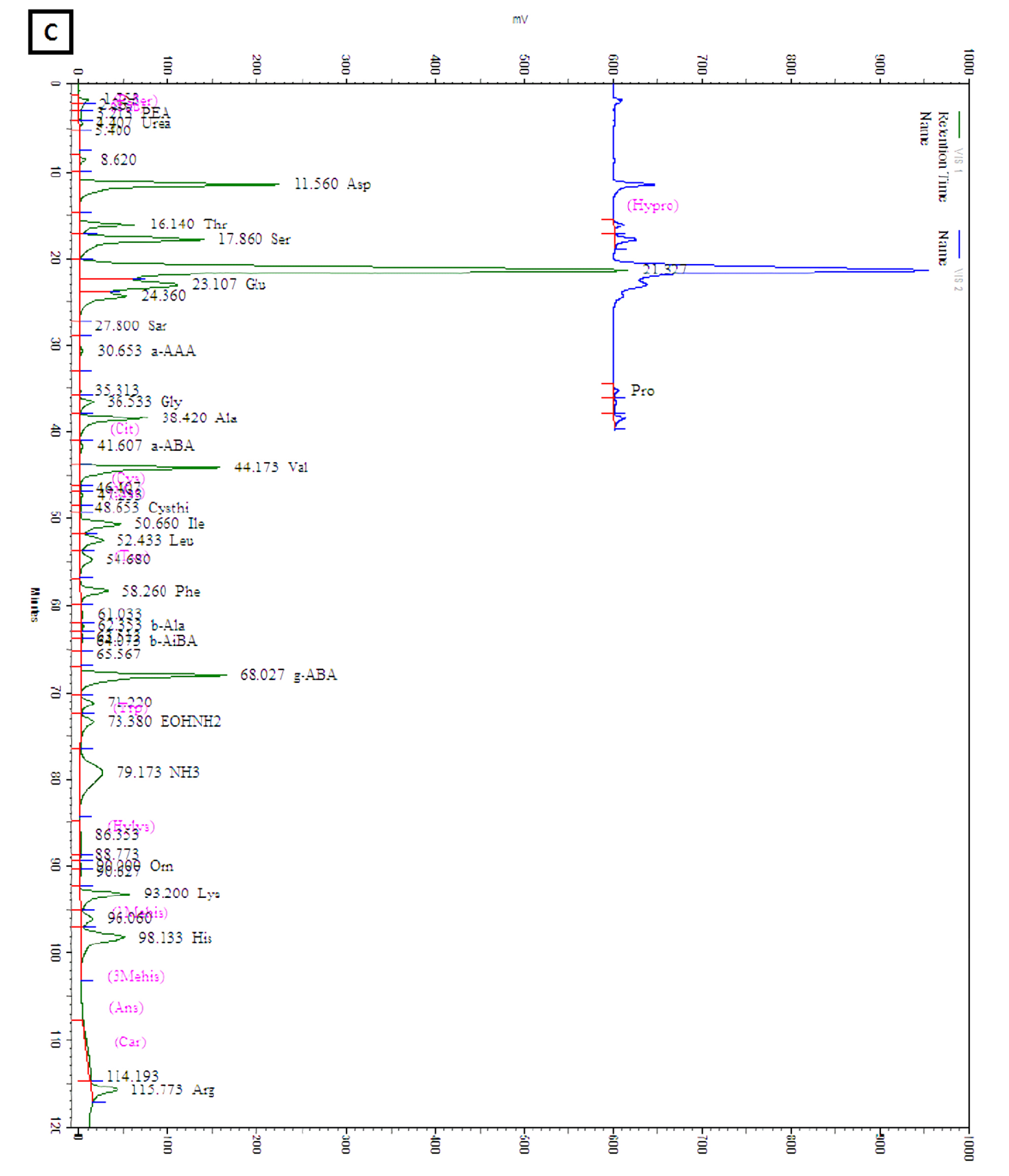 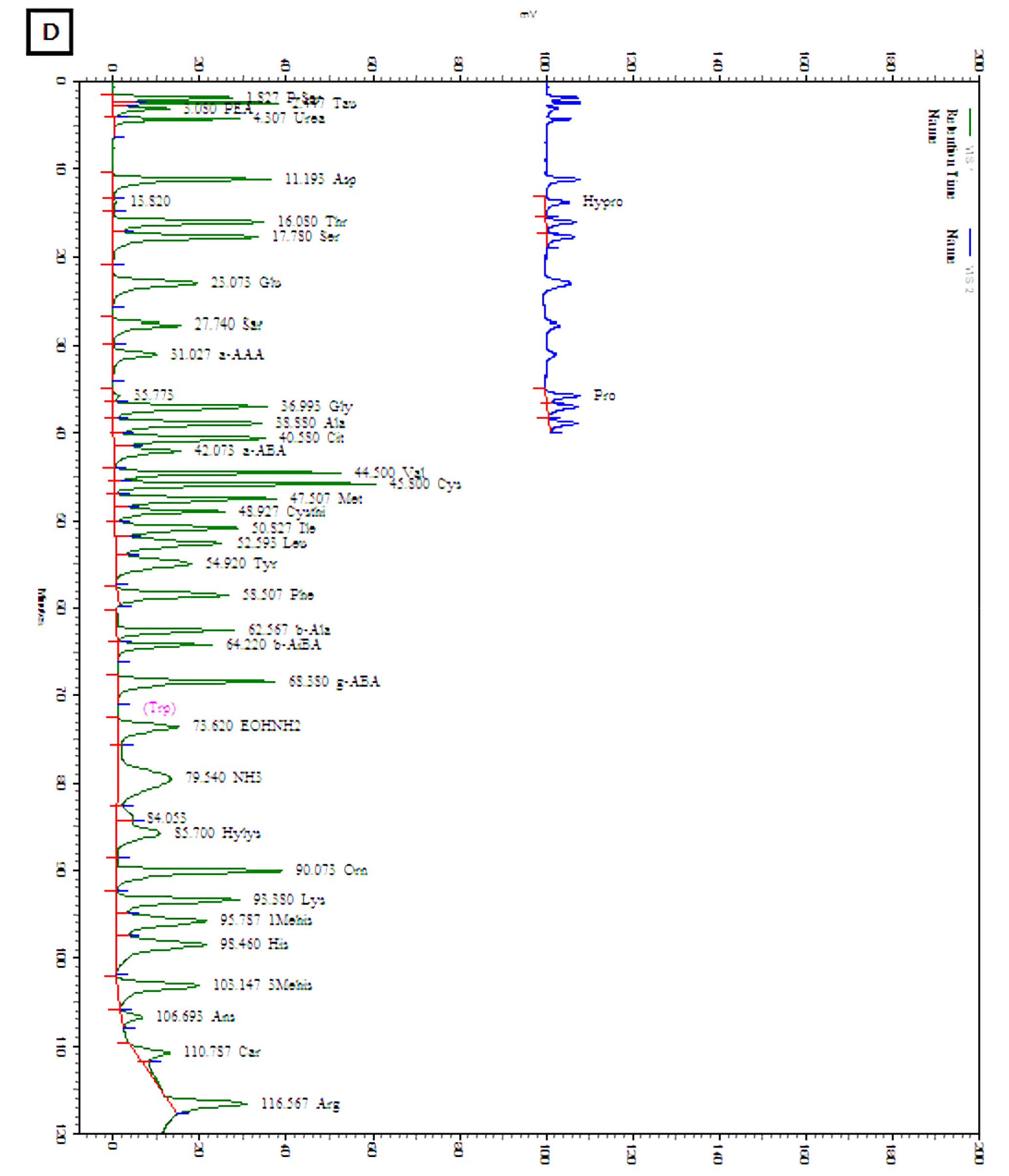 The pH suggests the capability of any microorganism to inoculate and multiply in a food (Tyl and Sadler, 2017). The difference in pH may affect the flavor and shelf-life of food (Aysegul et al., 2007).

The color of a food product is one of the major factors with regard to consumers’ preference. It may influence the consumers in purchasing a product. The variation in color value might be due to the difference in biochemical accumulation at a different time of sprout growing.

L-glutamic acid was one of the most abundant non-essential amino acids detected in the sprout samples, and is one of the precursors of γ-amino-n-butyric acid (GABA), which is primarily synthesized in plant tissues (Nikmaram et al., 2017). Glycine and GABA, which were some of the major non-essential found in the sprout samples, are associated with brain and memory enhancement, neurological diseases; anxiety relieve, sedation, anticonvulsant, and muscle relaxation functions (Krogsgaard-Larsen, 1989; Mody et al., 1994; Oh and Oh, 2004). Another abundantly found amino acid in the sprout sample was L-aspartic acid has enhanced fish survival against a bacteria Vibrio alginolyticus infection (Gong et al., 2020).

The reduced DPPH and total polyphenol content in the WS-30 might be due to the age of sprouts (Neill et al., 2002; Su, 2013). The ability of plant tissues to accumulate polyphenols may sometimes be determined by the age of the tissue and increased in young leaves (Murray et al., 1994) and reduced with leaf age possibly due to decreased response to environmental stresses (Nozzolillo et al., 1990). Younger sprouts of wheat could be a good option to consume because antioxidant-rich foods are considered beneficial for the prevention and control of various diseases. Several enzymatic and non-enzymatic antioxidants, such as glutathione peroxidase, superoxide dismutase, glutathione peroxidase, catalase, glutathione transferase, carotenoids, vitamin C, vitamin E, and polyphenols contribute for antioxidant activities (Kurutas, 2015). Different factors including the oxidation conditions, partitioning characteristics of particular antioxidants, and the condition of oxidizable substrate together determine the antioxidant potential of foods (Frankle and Meyer, 2000). Therefore, a noticeable change in the amount of a particular antioxidant such as total polyphenol might not always account for higher antioxidant activity, for instance, the DPPH radical scavenging potential measured in the present study. The total polyphenol content of WS-20 was higher than that of WS-10 but its DPPH free radical scavenging potentials was lower than that of WS-10. The discrepancies in the antioxidant potentials of different sprouts might be due to the influences of various phytochemicals.

In conclusion, the phytochemical and antioxidant potential of Korean wheat sprout grown for 10, 20, and 30 days were investigated. The pH of WS-10 was significantly lower than the other samples. Hunter color values were significantly affected by the age of sprouts. Chlorophyll content was lowest, however, the total free amino acid content was highest in WS-30. On the other hand, the antioxidant potentials measured through DPPH and total polyphenol content were lowest in WS-30. The results indicated that Korean wheat sprouts could be used as a source of nutrients and natural antioxidants.

This work was supported by the Kyungpook National University Research Fund, 2019, Daegu, Korea.

Kurutas, E.B. 2015. The importance of antioxidants which play the role in cellular response against oxidative/nitrosative stress: Current state. Nutr J. 15:71.