Effect of the Cold Treatment Period on a Plant’s Dormancy Breaking in the Winter Production of Gomchwi’s New Varieties (Ligularia fischeri (Ledeb.) Turcz)

Gomchwi (Ligularia fischeri (Ledeb.) Turcz.) is perennial plant grown nationwide in Korea. Gomchwi leaves are consumed either fresh or boiled. It is also dried and stored for later use. Gomchwi has been recognized as a good source of nutrition because of its antioxidant content and the various forms of vitamins and minerals it provides (Cho and Kim, 2005). Currently, in order to have fresh produce of January and February, Gomchwi or Gondalbi is planted in the water screen house during the months of August and September. Then, it is warmed in December, and harvested in late January or early February of the following year. Gomchwi or Gondalbi is a perennial plant which experiences dormancy during the winter season. Thus, it is necessary to break its dormancy in order to begin spear germination in forced culture. Dormancy of Gomchwi is usually stopped after being exposed to temperatures below 5℃ for more than 360 hours (Suh et al., 1996). There are many other crops that require a temperature lower than 5℃ to break its dormancy. For example, asparagus’ dormancy was broken using the following low temperature treatments: 5℃ or less for 1,000-1,250 hours in field of Jeju island area, and 5℃ for 504 hours in cold storage (Seong et al., 2002). The cold treatment period had positive effects on breaking the dormancy, promoting growth rate, and in increasing the yield of Asparagus (Lee et al., 2013). The recommended date of applying heating treatment is November 15 in order to have an increase in the quantity and quality of asparagus under plastic film house condition in the Jeju island area. In the forcing culture of asparagus, January 10 is the most desirable date for optimum heating (Seong et al., 2012). Yoo and Bae (1998) reported that cold treatments at 3℃ for 50 to 70 days and 5℃ for 60-70 days were used to break the dormancy for early production of young leaf in Butterbur (Petasites japonicas MAX.). In Udo (Aralia cordat THUNB.), the accumulated low temperature time of less than 5℃ is 720 hours (Yoo et al., 2000). For winter production of Primula sieboldii P. modesta var. fauriae and Disporum smilacinum, their dormancy was broken at a low temperature of 5℃ for 500 to 700 hours or more and then moved to a greenhouse to produce flower pot in the first week of February (Suh et al., 2006). Since Gomchwi is cultivated in the same days, it is important to find a method for breaking the dormancy of its new varieties, Gommany (Suh et al., 2016), Damogy (Suh et al., 2017) and Sammany (Suh et al., 2018), for the winter production. New varieties are more grower than common Gomchwi and have a large number of harvest leaves, which are highly yield and are also strong in powdery mildew disease. Therefore, in this study, plants were stored at a low temperature of 4℃ and were carried out in order to find their dormant properties by storage period.

The new varieties of Gomchwi used are ‘Gommany’, ‘Damogy’, and ‘Sammany’ cultivars. The plants used in this study were identified and selected as three-year-old plant grown in a highland area, measuring about 100 grams on October 31th, 2018. For the cold treatment, 20 plants of each variety were placed inside plastic bag, sealed, and stored in a 4℃ low temperature storage. The storage temperature was automatically controlled at 4 ± 1℃ and the room maintained a dark condition. Five treatments were placed for the cold treatment period: 5, 10, 15, 20, and 25 days. Each plant was taken out for processing and transferred to the glass greenhouse in Gangneung from November 5 to 25, 2018 as a 3-repeat of randomized block design. The lowest temperature in the greenhouse was set to 10℃ and it was managed by the boiler. From late December to late February, the rate of leaf emergence, growth and yield were observed. The plants were inspected for presence of new emerging leaves that measure more than 5 ㎝, while the height was calculated by adding the leaf length and the length of leaf petiole. In addition, the number of leaves per plant and the yield per plant were calculated through harvesting the leaves that are commercially viable. The data analysis used to test the significance with L.S.D. values and to plot the standard deviation was SAS statistical program (statistical analysis system, Version 9.1, SAS Institute Inc., USA).

Comparison of emergence ratio at different low temperature treatment duration of 4℃ and survey times on the new varieties of Gomchwi in winter season. Vertical bars show standard deviation of the means (n = 3). 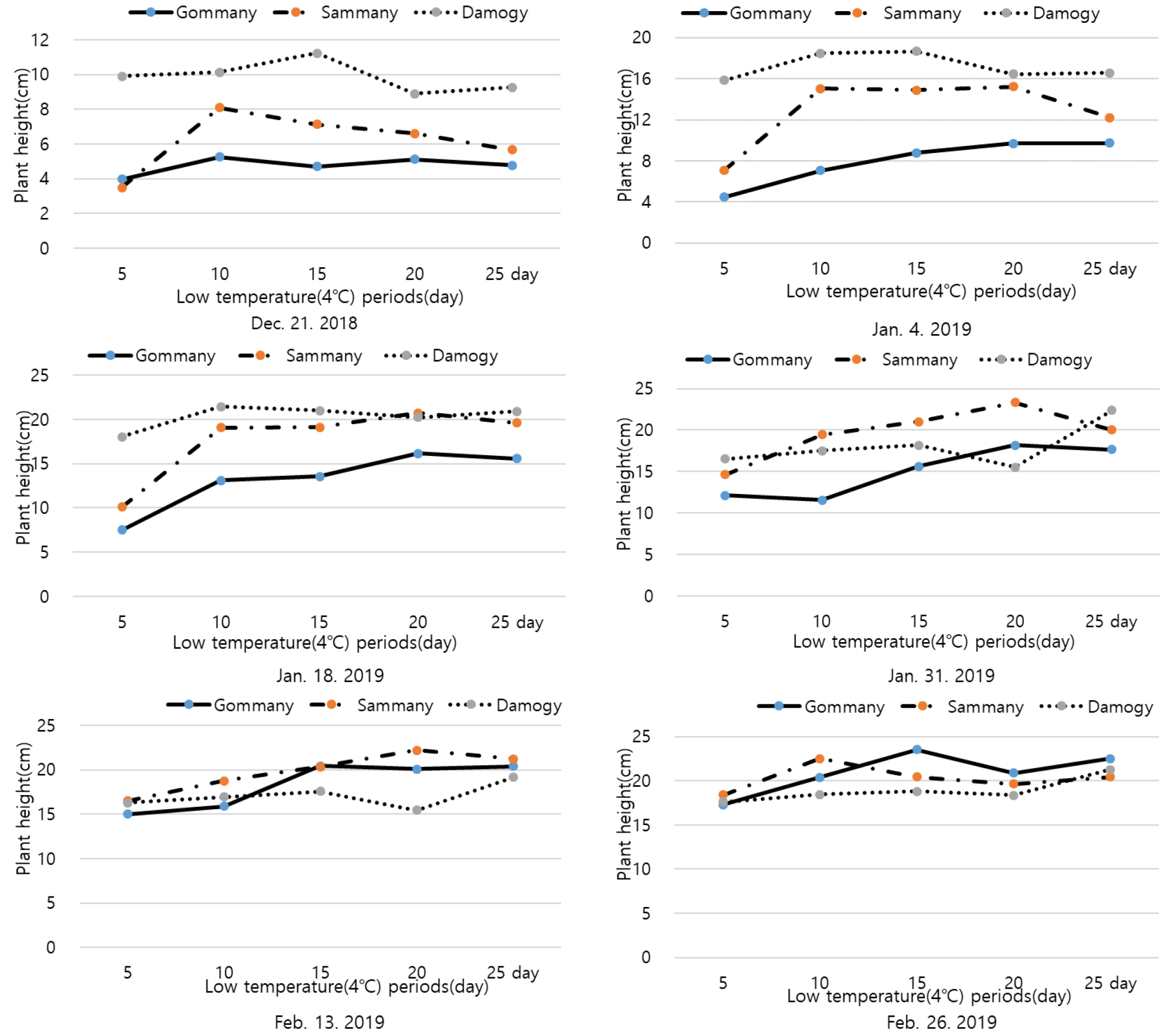 Comparison of plant height at different low temperature treatment duration of 4℃ and harvesting times on the new varieties of Gomchwi in winter season. Vertical bars show standard deviation of the means (n = 3).

Comparison of leaves number per plant at different low temperature treatment duration of 4℃ and harvesting times on the new varieties of Gomchwi in winter season. Vertical bars show standard deviation of the means (n = 3).

Comparison of yield per plant at different low temperature (4℃) treatment duration and harvesting times on the new varieties of Gomchwi in winter season. Vertical bars show standard deviation of the means (n = 3).

Table 1. Comparison of growth and yield characteristics at different low temperature treatment duration of 4℃ on the new varieties of Gomchwi in winter season

Based on the results above, the low temperature 4℃ treatment for each variety was able to break of the dormancy of ‘Damogy’ variety after 10 days of cold treatment, while for ‘Sammany’ variety, it took 15 days, and lastly, for ‘Gommany’ it was 25 days. According to Suh et al. (1996), for the early winter production of common Gomchwi, it must be kept at a low temperature of 5℃ for at least 360 hours. The ‘Sammany’ variety has a similar low temperature period requirement, while the ‘Damogy’ has a lower dormancy nature in contrast with ‘Gommany’ which has a deeper dormancy. These results show that the dormancy of plants also makes a difference between different varieties, which is also important academically. As such, it has been shown that the dormancy of new species of Gomchwi plant can be completely broken through the low temperature (4℃) treatment and its application on the most suitable period for each variety due to their differences in dormancy depth.

This study was completed with support from the Rural Development Administration’s research project (Project No. PJ01135702).