Dysphania ambrosioides (L.) Mosyakin & Clemants which belongs to Chenopodiaceae/Amaranthaceae sensu in APG system has been known as a useful plant in various fields as well as an invasive species spreading all over the world. To understand its phylogenetic relationship with neighbour species, we completed chloroplast genome of D. ambrosioides collected in Korea. Its length is 151,689 bp consisting of four sub-regions: 83,421 bp of large single copy (LSC) and 18,062 bp of small single copy (SSC) regions are separated by 25,103 bp of inverted repeat (IR) regions. 128 genes (84 protein-coding genes, eight rRNAs, and 36 tRNAs) were annotated. The overall GC content of the chloroplast genome is 36.9% and those in the LSC, SSC and IR regions are 34.9%, 30.3%, and 42.7%, respectively. Distribution of simple sequence repeats are similar to those of the other two Dysphania chloroplasts; however, different features can be utilized for population genetics. Nucleotide diversity of Dysphania chloroplast genomes 18 genes including two ribosomal RNAs contains high nucleotide diversity peaks, which may be genus or species-specific manner. Phylogenetic tree presents that D. ambrosioides occupied a basal position in genus Dysphania and phylogenetic relation of tribe level is presented clearly with complete chloroplast genomes.

Genus Dysphania R. Br. (Chenopodiaceae/Amaranthaceae sensu in APG system) contained only ten species originated from Australia (Wilson et al., 1983), but now this genus is composed of 48 taxa by including species from other genera (Mosyakin and Clemants, 2002; Mosyakin and Clemants, 2008; Perth, 2011; Verloove and Lambinon, 2006) as well as newly reported species in Chenopodiaceae (Dillon and Markey, 2016; Sukhorukov, 2012; Sukhorukov et al., 2015). This genus is characterized by presence of multicellular glandular hair in Flora of China (Zhu et al., 2003). The phylogenetic position of genus Dysphania have been confirmed and maintained as a robust monophyletic clade supported by many phylogenetic studies (Fuentes-Bazan et al., 2012a; Fuentes-Bazan et al., 2012b; Kadereit et al., 2003; Kadereit et al., 2010). Thanks to rapid development of next generation sequencing (NGS) technologies (Mardis, 2008; Metzker, 2010), several complete chloroplast genomes of Dysphania species have been sequenced to understand their genetic information as a candidate of cancer treatment (Chen and Yang, 2018), an invasive species (Kim et al., 2019), and investigation of intraspecies variation (Park and Kim, 2019).

The complete chloroplast of D. ambrosioides was compared to those of the other available Dysphania species including two D. pumilio and one D. botrys by aligning these sequences with MAFFT 7.388 (Katoh and Standley, 2013). Based on these alignment, nucleotide diversity was calcualted by inhouse pipeline implemented in the PCD (http://www.cp-genome.net; Park et al., in preparation). Calculation was done with parameters: 500-bp windows and 20-bp steps.

Simple sequence repeats (SSRs) were identified on the chloroplast genome sequence using the pipeline of the SSR database (SSRDB; http://ssr.pe.kr/; Park et al., in preparation). Based on conventional definition of SSR on chloroplast genome: MonoSSR (1 bp) to HexaSSR (6 bp) and total length of SSRs on chloroplast genome is above 10 bp. However, practically, many researches used on additional condition: number of minimum repeats of MonoSSR is 8 not 10 (Chen et al., 2015), and minimum repeats of PentaSSR and HexaSSR are 3 (Jeon and Kim, 2019; Li et al., 2019; Shukla et al., 2018) or 4 (Cheng et al., 2016; Kim et al., 2019) instead of 2. It may be caused by the reason that once there is sequence variation in SSR of which repeat is 2 and then it is no longer SSR because number of repeats of this mutated SSR is only 1. In addition, one research used one condition that number of repeats of MonoSSR can be 9 when there is corresponding SSR of which number of repeats is 10 in other species (Jeon and Kim, 2019).

After identifying SSRs on chloroplast genomes, their coordinates were compared with gene position to classify where they are originated from under the SSRDB (http://ssr.pe.kr/).

Nucleotide diversity was calculated based on the method proposed by Nei and Li (1979) based on multiple sequence alignment of three Dysphania chloroplast genome sequences using perl script. Window size is 500 bp and step size is 200 bp for sliding-window method. Genomic coordination of each window was compared with gene annotation of chloroplast genome for further analyses.

For the phylogenetic analysis, complete chloroplast genomes of 26 representative species from the Chenopodiaceae/Amaranthaceae sensu in APG system and seven species as outgroup species were aligned using MAFFT 7.388 (Katoh and Standley, 2013). All chloroplast genome sequences were retrieved from the PCD (http://www.cp-genome.net; Park et al., in preparation). The maximum likelihood (ML) phylogeny tree was constructed by IQ-TREE 1.6.6 (Nguyen et al., 2014) under the GTR+F+R3 model (1,000 replicates) and phylogenetic tree was modified using FigTree 1.4.4 (http://tree. bio.ed.ac.uk/software/figtree/). 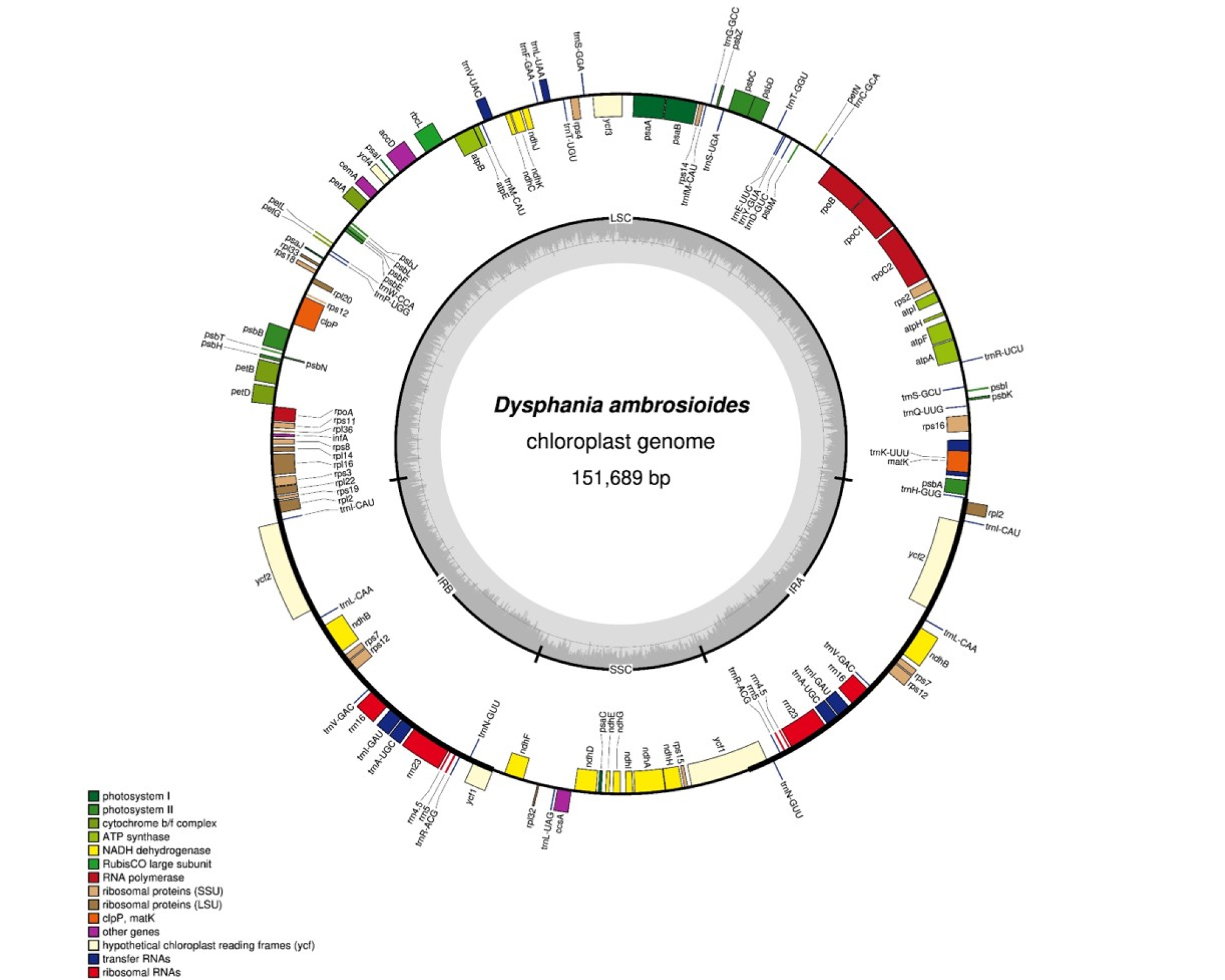 Gene map of Dysphania ambrosioides chloroplast genome. The genes located outside of the circle are transcribed clockwise, while those located inside are transcribed counterclockwise. The dark gray plot in the inner circle corresponds to GC content. Large single copy, small single copy, and inverted repeat are indicated with LSC, SSC, and IR (IRa and IRb), respectively. 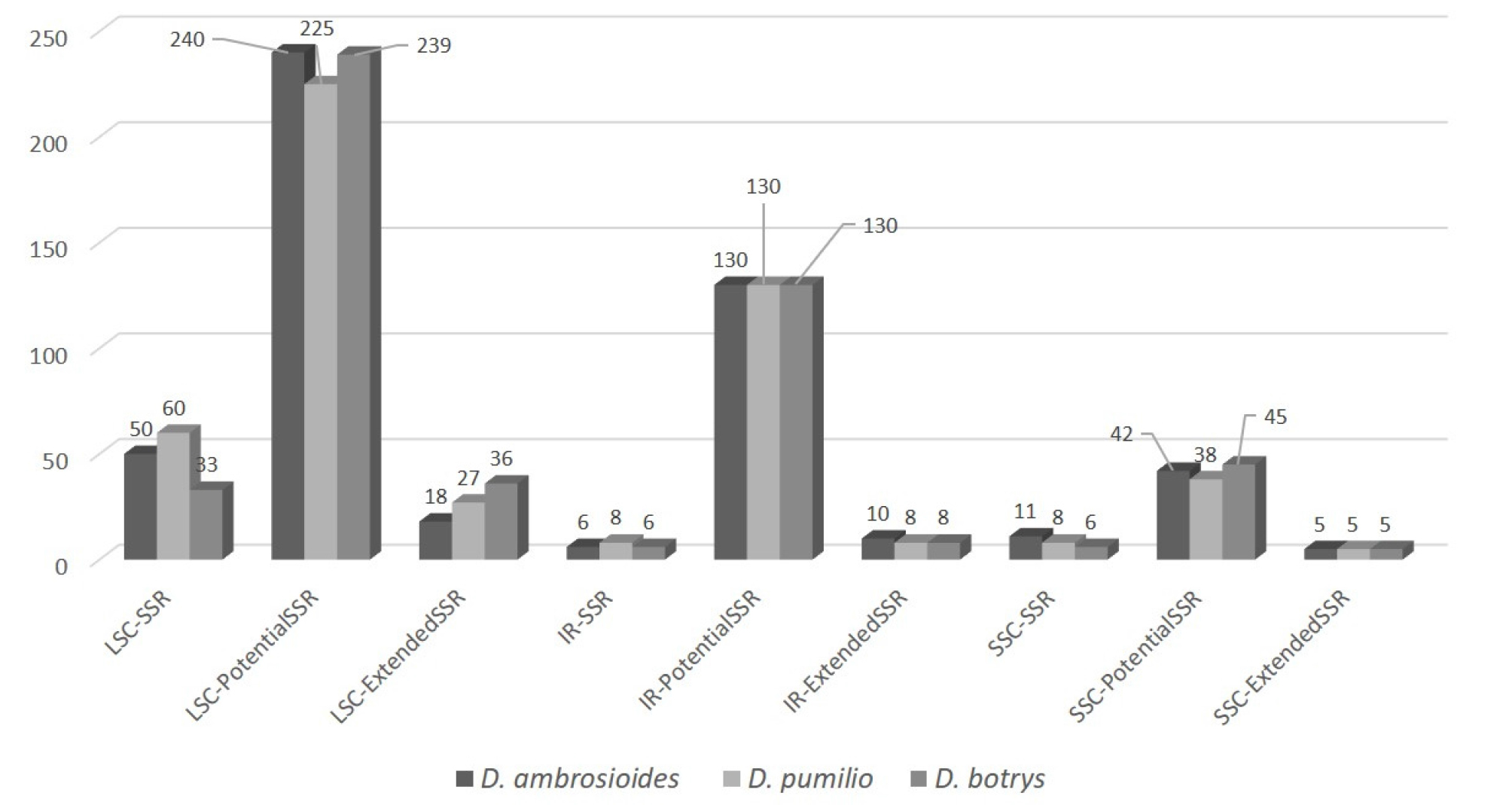 Along with types of SSRs (MonoSSR to HexaSSR), D. ambrosioides contains no PentaSSR and HexaSSR; while the other two Dysphania species have one PentaSSR (Fig 3). MonoSSR shows the highest number of SSRs among the six SSR types for all three Dysphania species, which is same to those of C. quinoa, C. album (Hong et al., 2017), Haloxylon ammodendron and H. persicum (Dong et al., 2016) in Chenopodiaceae and the three Rosa species in Rosaceae (Jeon and Kim, 2019; Kim et al., 2019; Li et al., 2019). However, trend of numbers of DiSSRs, TriSSRs, and TetraSSRs presents difference among three species: D. ambrosioides presents that number of DiSSRs is same to that of TetraSSRs and number of TriSSRs is the lowest, same trend to D. botrys (Fig 3). D. pumilio shows that number of DiSSRs is same to that of TetraSSRs, same to D. ambrosioides, but number of TriSSRs is higher than those of DiSSRs and TetraSSRs (Fig 3). Potential SSRs of which repeat number is 2 displays the same trend of PentaSSRs and HexaSSRs among three species and that of PentaSSRs is larger than that of HexaSSRs. Extended SSRs ranging from HeptaSSR to DecaSSR also present the same trend among three Dysphania species. Development of molecular markers for distinguishing Dysphania species as well as their populations, these differences can be utilized for better resolutions (Song et al., 2003; Wang et al., 2009; Würschum et al., 2013). 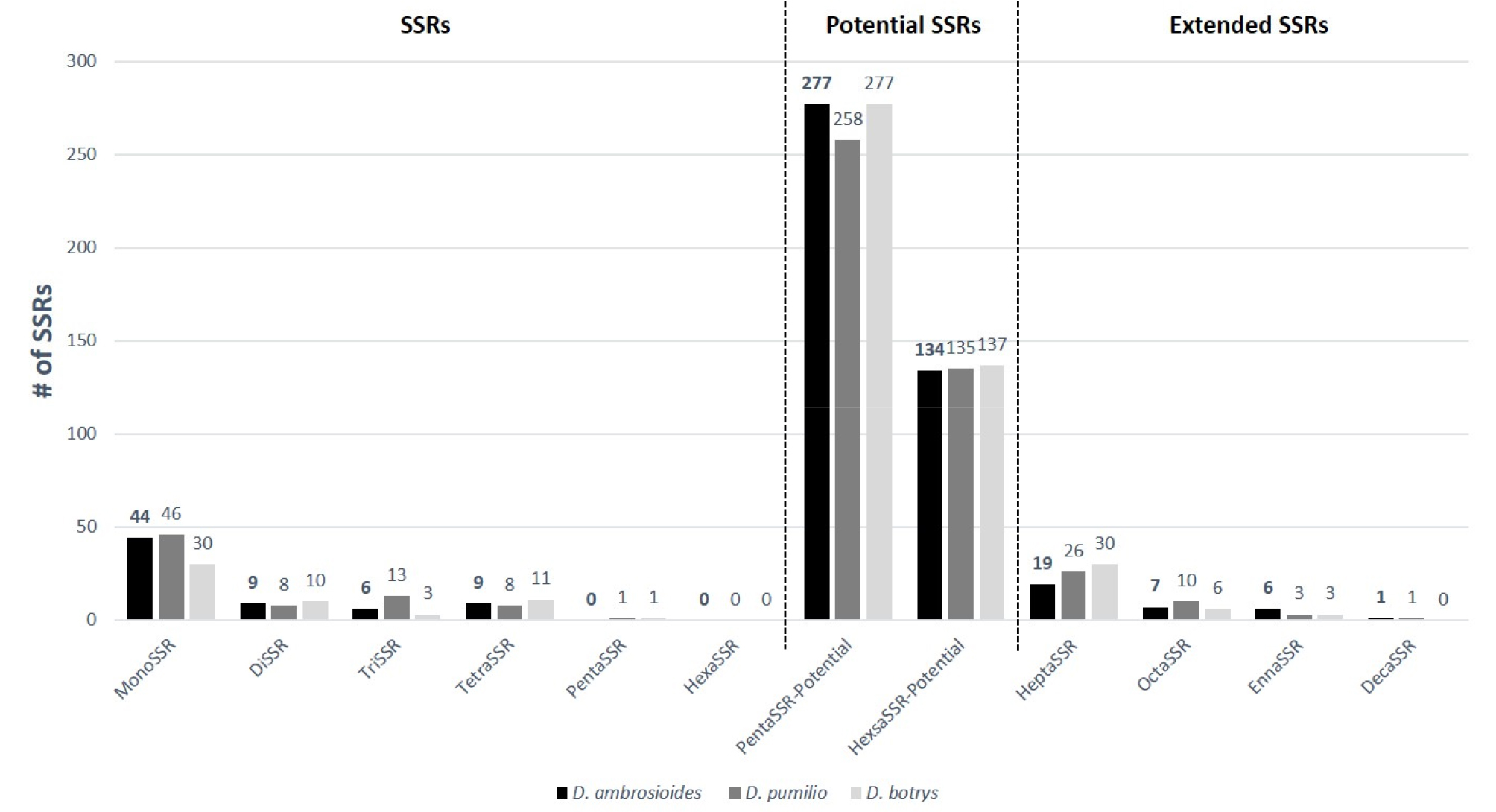 14 out of 68 SSRs are found in nine genes, rpoC2, rpoB, atpB, cemA, rpoA, rpl22, ycf1, ndhA as well as rrn23, ribosomal RNA, consisting of eight MonoSSRs, four TetraSSRs, and two TriSSRs (Table 2). 4 out of 33 extended SSRs covers four genes, ycf2, trnV-GAC, psbA, and rpoC2, which are different from eight genes containing SSRs (Table 2). Potential SSRs also covers many genes of which some are overlapped with genes containging SSRs (Appendix 1). These SSRs identified in protein-coding genes will be utilized for better population genetics studies because it may link to essential functions inside cell. 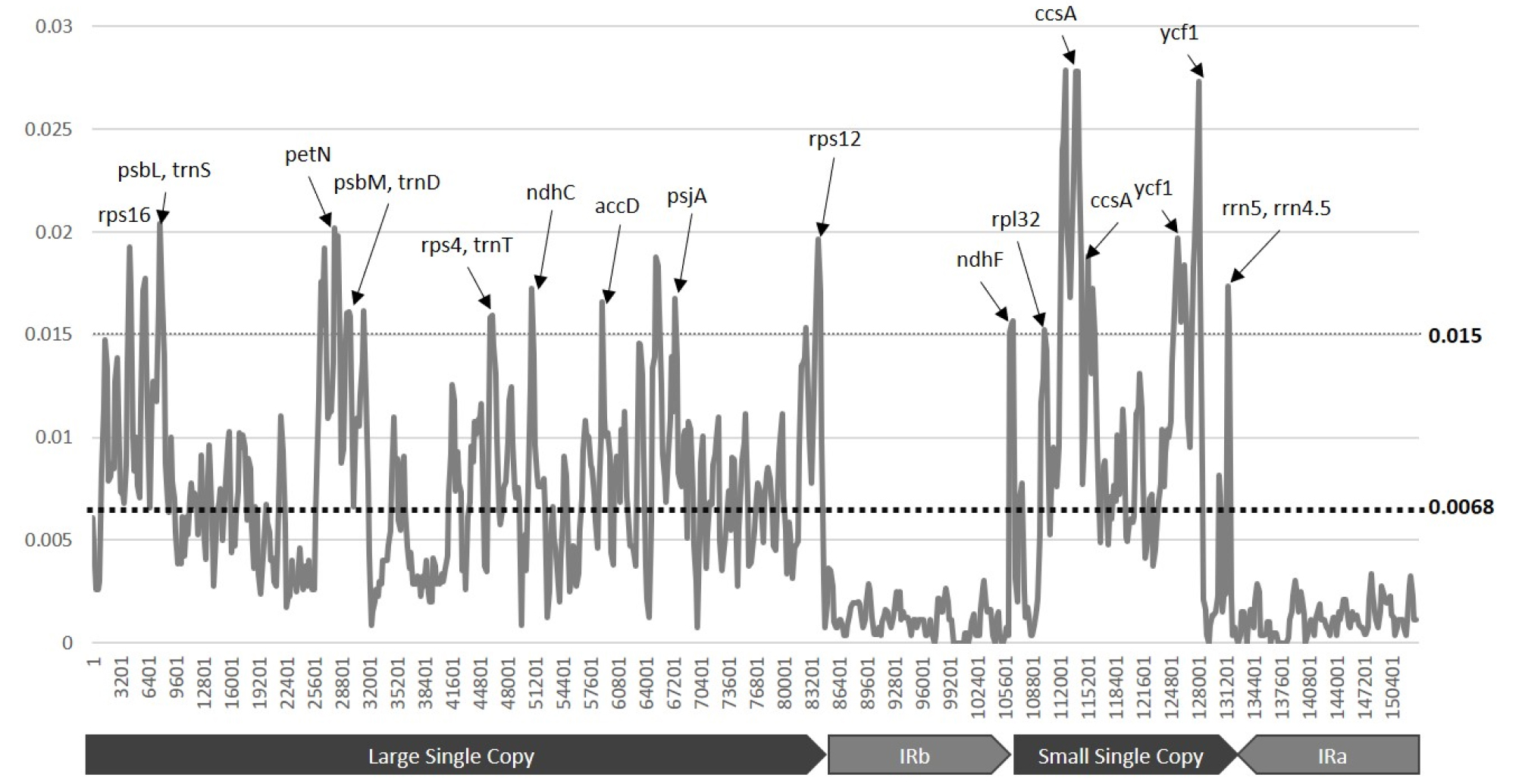 Comparison of the border positions of IR, SSC, and LSC regions among three Dysphania species. Diagrams present three chloroplast genomes of Dysphania with each region. Black arrows show length of each region except LSC, and gray arrow diagrams show genes located in junctions between LSC and IRb, IRb and SSC, SSC and IRa, and IRa and LSC. 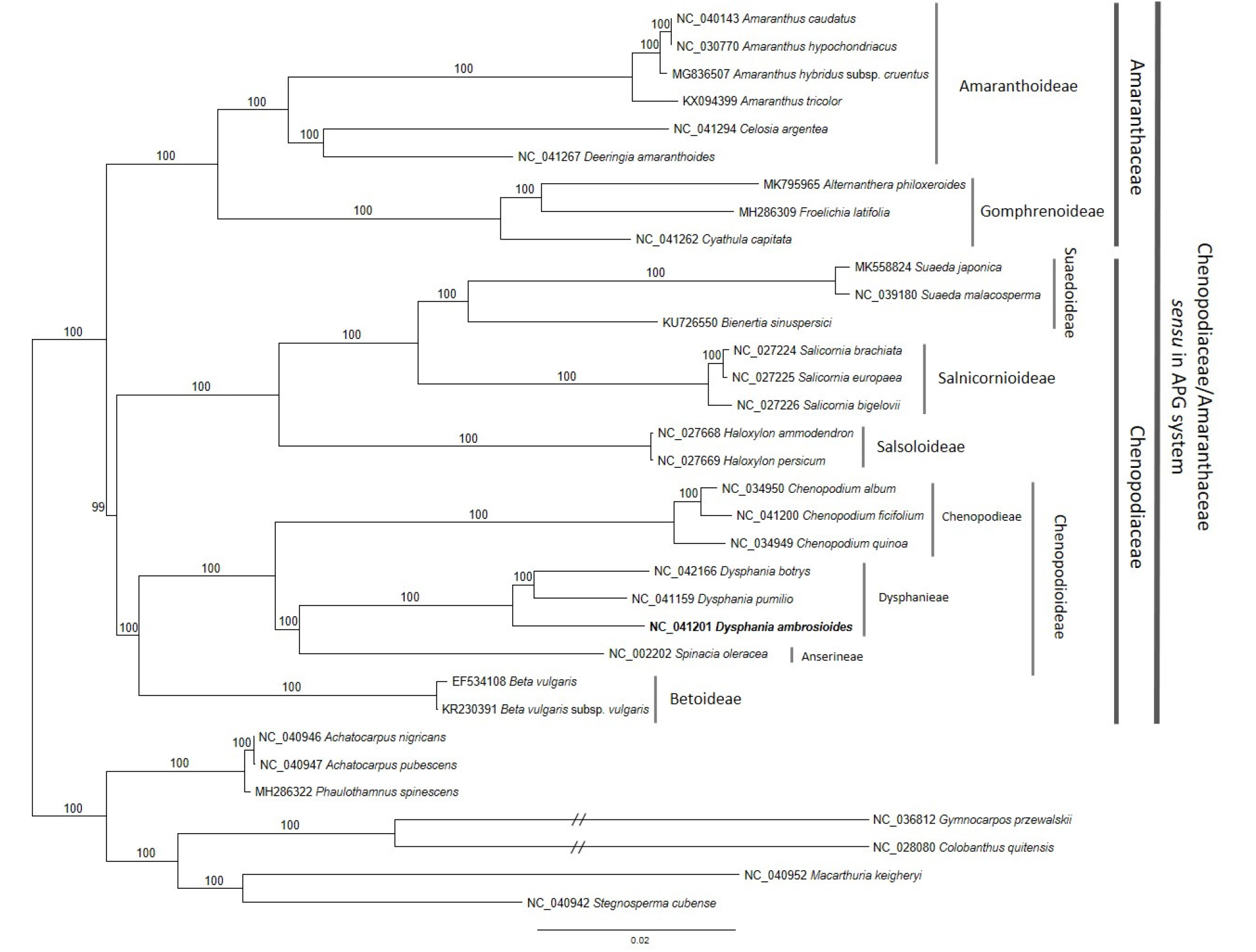 This research was supported by Rural Development Administration (PJ013855052019).

The authors declare no conflict of interest.

Bammou, L., M. Belkhaouda, R. Salghi, O. Benali, A. Zarrouk, H. Zarrok and B. Hammouti. 2014. Corrosion inhibition of steel in sulfuric acidic solution by the Chenopodium Ambrosioides Extracts. Journal of the Association of Arab Universities for Basic and Applied Sciences 16(1):83-90.

Chen, Y. and Z. Yang. 2018. Characterization of the complete plastome of Dysphania botrys, a candidate plant for cancer treatment. Mitochondrial DNA B 3(2):1214-1215.

Mito, T. and T. Uesugi. 2004. Invasive alien species in Japan: the status quo and the new regulation for prevention of their adverse effects. Global Environmental Research 8(2): 171-193.

Prasad, C.S., R. Shukla, A. Kumar and N. Dubey. 2010. In vitro and in vivo antifungal activity of essential oils of Cymbopogon martini and Chenopodium ambrosioides and their synergism against dermatophytes. Mycoses 53(2):123- 129.