The establishment of invasive alien species management is widely recognized as a pivotal issue in the preservation of biodiversity. Ranunculus sardous Crantz, a species native to Europe, has been widely introduced in many other areas of the world, including the coasts of the United States, Australia, China, India, and Japan. In Korea, the first population of this plant was found growing adjacent to a wetland in Hanon, Seogwipo-si, Jeju Province, on 22 May 2018. Field observations confirmed the presences of at least two populations of this species in Jeju Province, Korea. This species is similar to Ranunculus sceleratus L., but can be readily distinguished by its presence of the trichomes in the whole plant, longer petioles of radical leaves, ovate-shaped leaf segments, globose to subglobose-shaped fruits and flat achenes with narrowly winged and papillae. The Invasive Alien Plant Risk Assessment (IAPRA), a system for recognizing and categorizing alien plants in Korea forests, was used to assess the invasiveness status of the species. Based on this system, R. sardous received a low score of 6, suggesting its potential invasion to natural forests. Although the current distribution of R. sardous is restricted to Jeju Province and thus far has had limited impact on local environments, local and regulatory authorities should pay close attention to this plant and take measures to prevent its further expansion.

A major step in tackling invasive alien plants consists of identifying those species that represent a future threat to managed and unmanaged habitats (Brunel et al., 2010). Korea National Arboretum of the Korea Forest Service reviews and organizes data on alien plants in order to build a checklist of Invasive Alien Plants (IAP). A prioritization system is being developed to select species that represent emerging threats and require the analysis of their invasiveness risk state to develop and implement preventive measures against their proliferation.

During recent field investigations carried out in the vicinity of the wetland of Jeju-do, Korea, we discovered an unusual and rather isolated population of Ranunculus, which appeared to be morphologically well differentiated from other Ranunculus taxa previously recorded in the flora of Korea. After the examination of various floras and herbarium specimens from Korea and adjacent countries as well as the relevant literature (Kadota, 2006; Wang and Gilbert, 2001), it was concluded that the collected specimens belong to Ranunculus sardous Crantz, a species native to Europe that is introduced in many other areas of the world, including the United States, Australia, China, India and Japan.

Therefore, we provide a detailed description, illustrations and color photographs of this newly recorded non-native plant in the flora of Korea that can be utilized for its effective management.

Morphological observations of the new alien species were conducted on living plants and dry specimens between 2018 and 2019. The photographs in the field were captured with a Nikon Coolpix P520 camera (Tokyo, Japan). The measurements of the morphological characters were performed with a Mitutoyo 500-196-30 absolute digimatic caliper (Kanagawa, Japan) and the data were also derived from field notes. The flowering and fruiting periods are given as cited on the collector’s labels. The examined material was been deposited in the Korea National Arboretum (KH). Voucher specimens of Ranunculus sceleratus L. deposited in the KH collection were studied. The invasiveness status was assessed by applying the Invasive Alien Plant Risk Assessment system (Jung et al., 2015) (Tables 1, 2) and standardized terms for alien plants were used accordance with the classification by Jung et al. (2017). 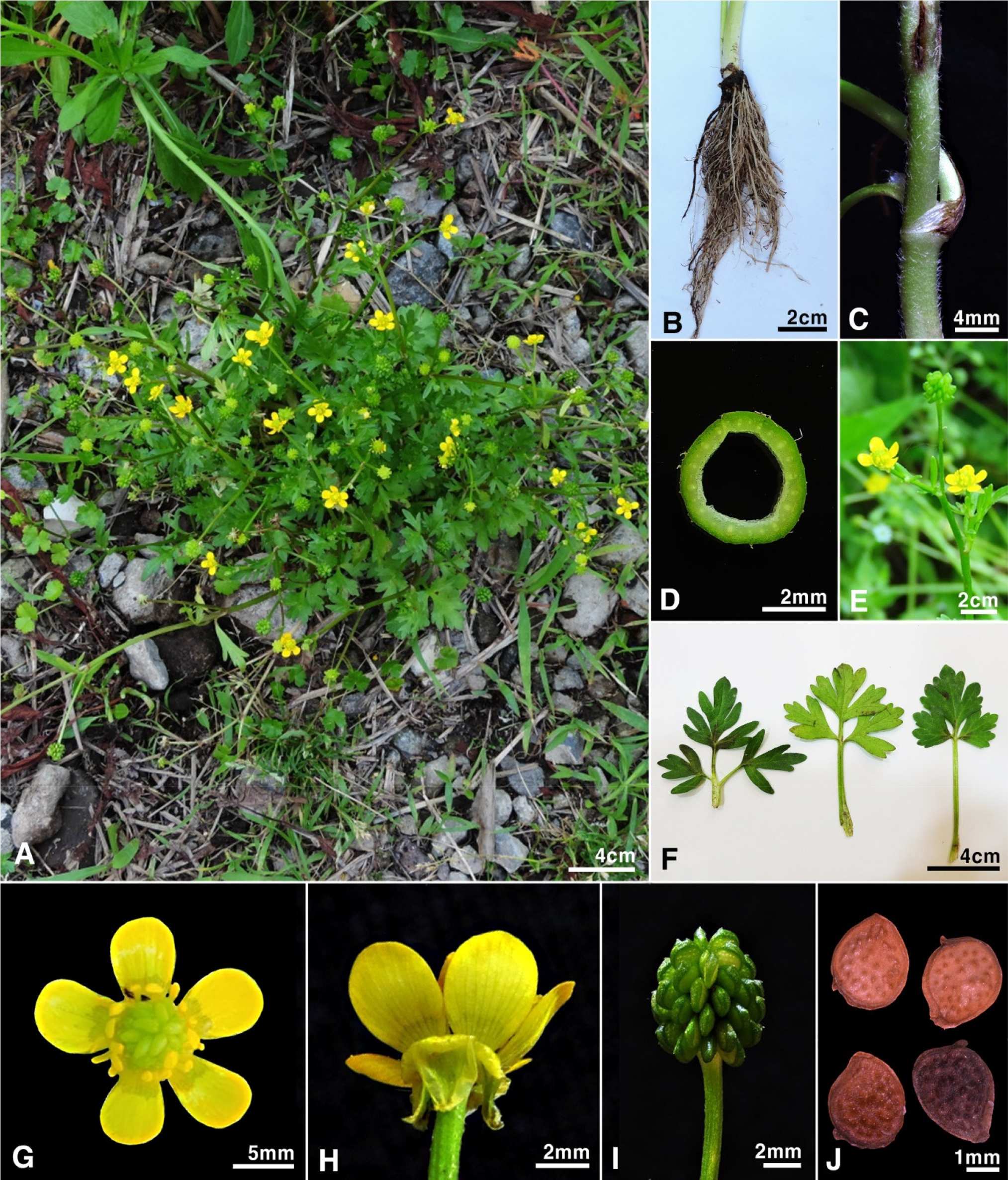 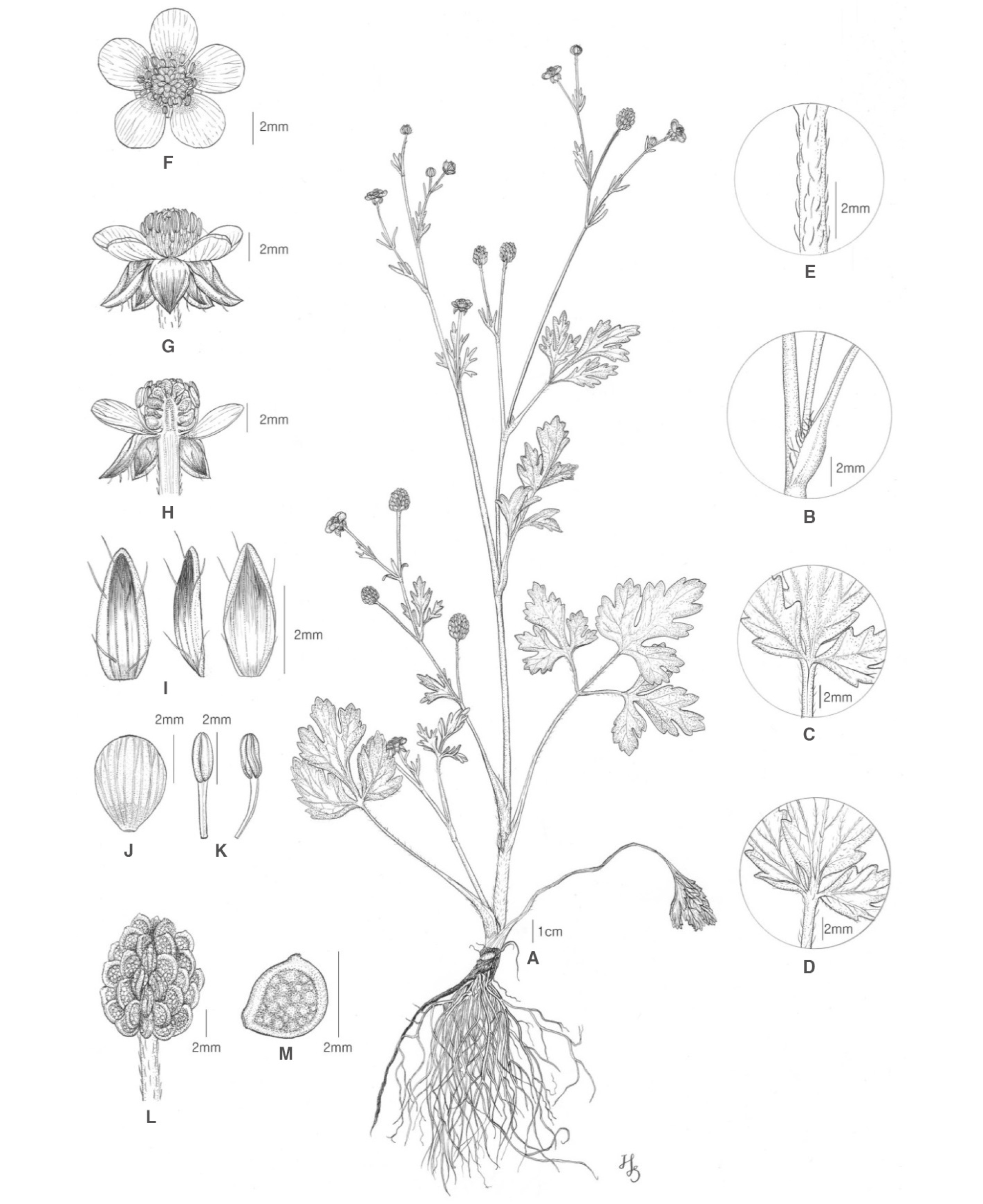 Habitat and ecology: Based on field observations, at least two populations of this species were observed growing adjacent to a wetland in Hanon, Jeju Province, Korea. This habitat is located in a sunny paddy field. They formed dense mono-species stand of 20 × 30 m in size and sporadic individual along the edges and waterways of paddies, stands mixed with native plants such as a large populations of R. cantoniensis DC., Hydrocotyle maritima Honda, Poa annua L. and Erigeron annuus (L.) Pers. etc. in herbaceous layer.

Invasiveness risk assessment in forest: R. sardous origin in Europe, recently it has been managed as an invasive alien plant in Japan and China. In the study, it was assigned a low score of 6, suggesting its potential for invasion in forest according to the classification by Jung et al. (2015). R. sardous is a casual alien plant mainly distributed in forest edge of lowland, forming small populations with regional and low frequency of occurrence in Korea (Jung et al., 2017). The population size is less 100 mature individuals. It is difficult to trace how this species was introduced from the location of native to Korea, but considering the environment of habitat, we can be assumed that it immigrated long ago. Although the current distribution of R. sardous is restricted to Hanon Wetlands in Jeju Province because this location are paddy fields, which are removed for paddy farming in June (weeding season). So, Thus far has limited impact on local environments, But wetlands and coastal areas are prone to invasion of alien plant species owing to their frequent exposure to stress and disturbance (Cho and Cho, 2015; Kim et al., 2019). Besides, there is strong case for the spread dramatically of R. sardous in many other areas of the world (USDA, NRCS, 2019). Therefore, local and regulatory authorities should pay close attention to this plant and take measures to stop its expansion.

Taxonomic note: R. sardous shows morphological similarities with R. sceleratus L. in being annual, 3-partite leaf blades and reflexed sepals etc. Despite these similarities, there are clear differences between these two species in the presence of trichomes and the shape of leaf segments, aggregated fruits and achenes (Figs. 1, 2; Table 3). Furthermore, R. sardous is characterized by longer petioles of basal leaves and middle leaf segments abruptly contracted into a stalk when compared with those of R. sceleratus (Srivastava, 2010).

Key for identification of the genus Ranunculus L. in Korea

Authors declare that there is no conflict of interests.

This study was supported by the Korea National Arboretum, project No. ‘KNA1-2-27, 16-5’. We would like to thank the anonymous reviewers for their valuable comments and suggestions.