Leaf Thinning and Fruit Quality of ‘Hongro’/M.9 Apple Trees by Foliar Application of Cu-EDTA and Fe-EDTA

Hand leaf thinning for improvement of fruit coloration and quality is one of the most labor-consuming works in Korean apple cultivation. The study was aimed at investigating whether foliar application of two chelate compounds (Cu-EDTA, Fe-EDTA) could defoliate effectively ‘Hongro’/M.9 apple leaves and enhance fruit coloration and quality. At 30 days before harvest, foliar spray with two chelate compounds defoliated significantly the apple leaves. Chelate treatments did not affect the leaf chlorophyll content. High concentration of chelates decreased drastically photosynthetic rate of true leaves, and then it stayed in low levels, whereas low levels of chelates reduced sharply the photosynthetic rate but it was gradually restored over time. Cu-EDTA regardless of its concentration triggered higher defoliation compared to Fe-EDTA. Consequently, higher defoliation improved light interception of fruits and accumulated more anthocyanin. Particularly, Cu-EDTA could target mainly fruit cluster leaves which affect directly light interception of the fruits, i.e. more selective defoliants compared to Fe-EDTA. However, 3% Cu-EDTA rather defoliated excessively, accompanying with reduction of fruit weight and soluble solids. Therefore, our results suggest that 1% Cu-EDTA which defoliates properly the fruit cluster leaves could improve coloration and quality of ‘Hongro’/M.9 apple fruits.

Fruit quality of apple is affected by various factors such as fruit size and shape, fruit coloration, soluble solids, and acidity (Cho and Yoon, 2006). Among them, fruit coloration, which is the most important factor for determining visual preference of fruits, has a critical impact on marketability and price.

In previous study for improvement of fruit coloration and laborsaving, an anti-auxin growth regulator, 2,3,5-triiodobenzoic acid (TIBA) had been used as a defoliant in ‘Ralls Janet’ and ‘Jonathan’ apples (Kim and Yun, 1971), but it was prohibited because of food safety concerns. Thereafter, harmless natural abscisic acid (ABA) and its synthetic intermediate STC-4771 were tried to ‘Fuji’ and ‘Jonathan’ apples. However, they had difficulty in practical application to commercial apple orchards due to their unstable defoliation effect (Kamuro and Sakai, 1995; Yim et al., 2000). On the other hand, foliar spray of chelate compounds Cu-EDTA and Fe-EDTA has conventionally been used to advance digging period on apple nursery stocks in late fall and as a result, to protect them from freezing injury (Knight, 1983). Although it has been well known that the chelate compounds have a positive effect on defoliation in apple nursery plants, there exists rare information about effect of them on fruit quality during growing season in apple orchards.

The study was performed to investigate whether foliar spray of two chelate compounds, i.e. Cu-EDTA and Fe-EDTA, as an individual or a mixture could induce defoliation of ‘Hongro’/M.9 apple trees during growing season in an apple orchard and determine changes of fruit quality at that time.

Plant Material and Treatment of Chelates

Seven-year-old ‘Hongro’/M.9 apple trees cultivated in an apple orchard in Cheongju, Korea were used in this study. Cu-EDTA (Ethylendiaminete-traacetic acid copper disodium salt tetrahydrate, Junsei Chemical Co., Ltd, Japan) and Fe-EDTA (EDTA ferric sodium salt trihydrate, Samchun Pure Chemical Co., Korea) chelate compounds were foliar-sprayed as follows: (1) control (sprayed with only distilled water), (2) 1% Cu-EDTA, (3) 3% Cu-EDTA, (4) 1% Fe-EDTA, (5) 3% Fe-EDTA, and (6) 1% Cu-EDTA + 1% Fe-EDTA. A total of 18 trees with similar vigor and fruiting were selected (3 trees per treatment). Only one main branch of them was used for each treatment. Foliar spray of the chelates was applied on August 06th, 2009 at 30 days before harvest. During spraying, trees were isolated from each other using waterproof cloth to prevent contamination from other treatment solutions.

Photosynthetic Changes of the Chelates-Treated Leaves

Fruit was harvested on September 07th, 2009 and its quality was evaluated at the same day. All fruit from each main branch were collected and 10 fruits from them were randomly selected. Fruit skin color was determined as CIE (Commission Internationale de I’Eclairage) color values by measuring three spots of the stem end of each apple using a colorimeter (CR-300, Minolta, Japan). A durometer (FHM-5, Takemura, Japan) with a Ø5 ㎟firmness-needle was used to measure firmness of the peel and flesh. Soluble solids content was measured with a digital refractometer (Digital refractometer PR-101, Atago, Japan) using juice obtained by crushing and squeezing flesh. Acidity was analyzed by squeezing flesh, filtering the juice, adding 20 mL of distilled water to 5 mL of the juice, and titrating the mixture with 0.1 N NaOH. Data were obtained by converting the amount of NaOH consumed until the discoloring point to the amount of malic acid. Anthocyanin content was assessed by collecting 10 peel discs using a cork borer (Ø1.1 ㎜), dipping them in 20 mL of anthocyanin extraction liquid [MeOH (85) : 0.1 N HCl (15)] in darkness at 4℃ for 24 h, and measuring with a 530 ㎚ UV/visible spectrophotometer (Ultrospec 4000, Pharmacia Biotech, Sweden).

Defoliation rate of ‘Hongro’/M.9 apple trees were investigated after foliar spray of two chelate compounds (Fig. 1). Most chelate compound treatments increased dramatically defoliation rates during one week since 4 to 6 days after foliar spraying. Afterward, such tendency was gradually mitigated. Defoliation rates were higher in Cu-EDTA treatments than Fe-EDTA, and 3% Cu-EDTA showed the highest defoliation rate among the treatments. In this study, leaves of investigated ‘Hongro’/M.9 apple trees were classified into 3 types: fruit cluster leaves, bourse shoot leaves, and true leaves. Defoliation rate according to leaf types was in order of fruit cluster leaves > true leaves > bourse shoot leaves. Fruit cluster leaves are related directly to light interception of fruits and they possess relatively lower photosynthetic rate compared to leaves of the other positions (Choi et al., 2000). Thus it is a desirable thing to remove primarily fruit cluster leaves for less reduction of photosynthates (Choi et al., 2000). In this respect, foliar spray of the two chelate compounds is considered to indicate an advantageous defoliation pattern for quality improvement of ‘Hongro’/M.9 apples. 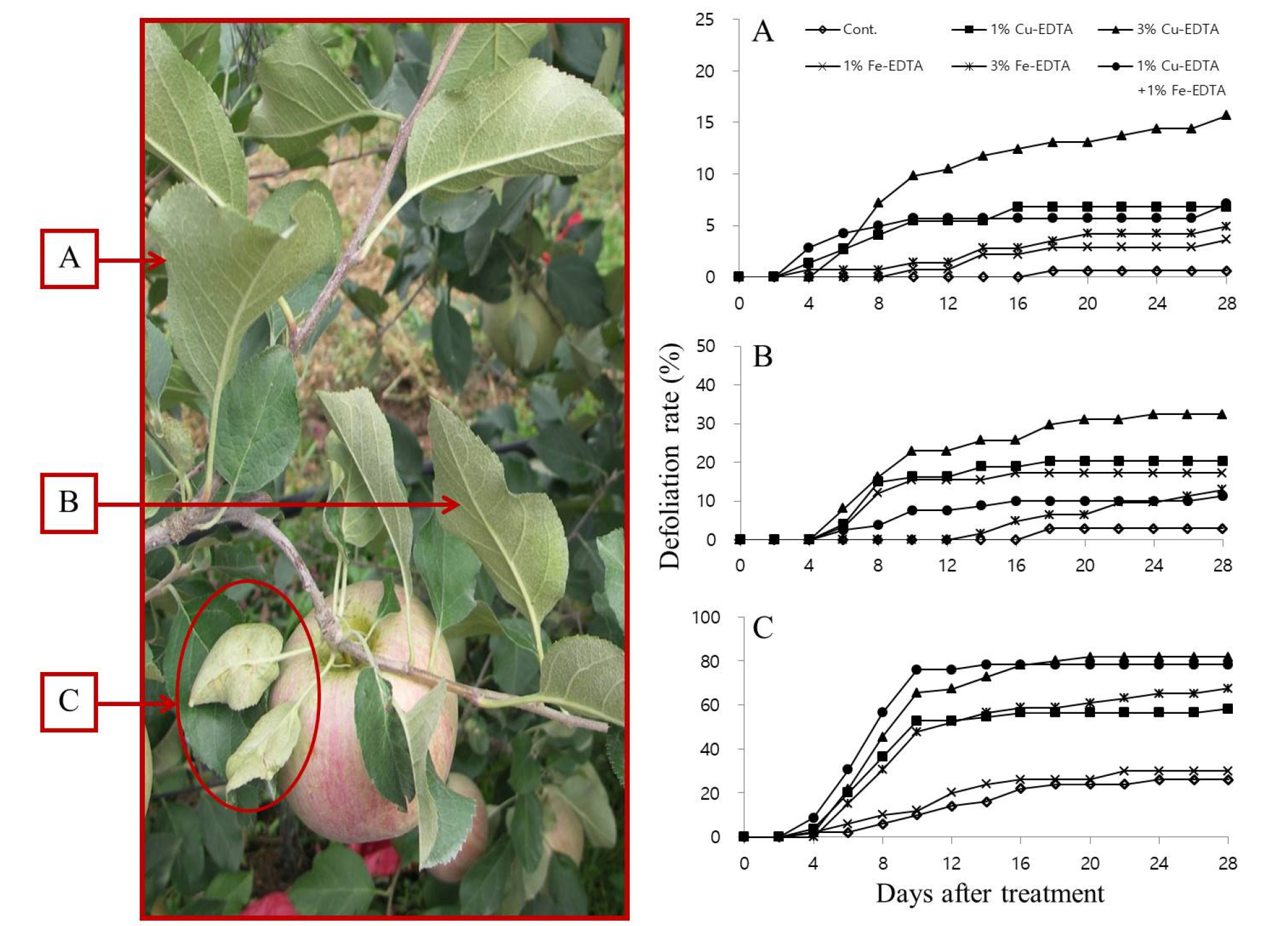 Chlorophyll content of true leaves was measured at 10 days after foliar spray of the chelates (Fig. 2). Chelate treatments did not decrease significantly the leaf chlorophyll content compared to the control. This result means that the chelate treatments might induce defoliation without process of leaf senescence such as chlorophyll degradation. As a result, transfer of nitrogen and photosynthates from leaves to stems might be deficient (Guak et al., 2001). Investigation about nitrogen content and early growth of trees is needed for development of a defoliant, since accumulation of reserve nutrients such as nitrogen and photosynthates affects tree growth of the following year in deciduous fruit trees (Millard, 1996; Furze et al., 2019).

Chlorophyll contents of true leaves of 7-year-old ‘Hongro’/M.9 apple trees at 16 days after the application of Cu-EDTA and/or Fe-EDTA foliar spray. Cont., water spray; A, 1% Cu-EDTA; B, 3% Cu-EDTA; C, 1% Fe-EDTA; D, 3% Fe-EDTA; E, 1% Cu-EDTA + 1% Fe-EDTA. Bars represent standard error of means from 15 replications. There is no statistical difference at p < 0.05 between the control and chelate treatments.

Photosynthetic rate of true leaves decreased drastically in high concentration of chelates, and then it stayed in low levels, whereas low levels of chelates reduced sharply the photosynthetic rate but it was gradually restored over time (Fig. 3). Immoderate defoliation can result in decrease of photosynthetic rate which affects negatively fruit quality such as fruit enlargement, soluble solids content, and fruit coloration (Matsumoto et al., 2017). However, 1% Cu-EDTA treatment restored particularly photosynthetic capacity by the similar level in comparison to the control at 10 days after foliar spraying.

Fruit quality of ‘Hongro’/M.9 apples in response to foliar spray of chelates is indicated in Table 1. Fruit weight was 223.6 g in the control, 226.4 g in 1% Cu-EDTA, and 222.7 g in 1% Fe-EDTA, whereas it decreased significantly in high concentration (3%) of Cu- and Fe-EDTA, and 1% Cu-EDTA + 1% Fe-EDTA. Soluble solids content was 14.7 °Brix in 1% Cu-EDTA, similar to 14.8 °Brix in the control, while the other chelate treatments decreased significantly compared to the control. Leaf produces generally assimilates through photosynthesis (Taiz and Zeiger, 2002). Photosynthates produced at leaves generally move to fruits during the mature period (Loescher et al., 1990) and they affect directly development and sugar accumulation of fruits (Kang and Ko, 1976; Lee and Kang, 1996). Thus, enhanced defoliation due to foliar spray of chelates inhibited synthesis of the assimilates and their transfer to fruits. That could induce decline of fruit weight and soluble solids. Particularly, 1% Cu-EDTA triggered comparatively higher defoliation of fruit cluster leaves compared to the other chelate treatments, but not in true leaves and bourse shoot leaves the defoliation of which affects directly development of fruits. Therefore, fruit weight and soluble solids content in 1% Cu-EDTA treatment were maintained at the similar level to the control. Acidity was not significantly different (p > 0.05) between the treatments. This result is consistent with the reports that defoliation did not have any obvious effect on acidity (Yim and Lee, 1999; Choi et al., 2000; Parker et al., 2015). Flesh firmness of the apples suffered by the chelate treatments ranged from 1.57 to 1.79 ㎏·Ø5 ㎜-1. Compared to other studies, their firmness was included in the normal range (Choi, 2000; Choi and Huh, 2001).

Table 2 shows fruit coloration of ‘Hongro’/M.9 trees treated with chelate compounds. Although CIE a* value, which means degree of expression of red color, was relatively higher of 24.99 in the control than the other chelate treatments, CIE b* value, which means degree of expression of yellow color, was also higher of 12.06 in the control than the others. This result means that the control did not show even red coloration. On the other hand, Cu-EDTA treatments regardless of its concentration indicated higher defoliation compared to Fe-EDTA treatments. Consequently, higher defoliation made better light interception of fruits and more anthocyanin accumulation (Table 2, Fig. 4), meaning more expression of red color (Jackson et al., 1971). However, 3% Cu-EDTA which induced the highest defoliation rate was similar to 1% Cu-EDTA in anthocyanin accumulation, because 3% Cu-EDTA made excessive defoliation inducing decrease of photosynthetic rate and limiting transfer of the assimilates to fruits, to prevent eventually accumulation of soluble solids to be used as a matrix for production of the anthocyanin (Pirie and Mullins, 1976).

This work was supported by Gyeongnam National University of Science and Technology Grant in 2018.

Pirie, A. and M.G. Mullins. 1976. Changes in anthocyanin and phenolics content of grapevine leaf and fruit tissues treated with sucrose, nitrate, and abscisic acid. Plant Physiol. 58:486-472.